David DelCollo is a Philadelphia attorney with more than a decade of experience in the legal field. He’s currently employed by large pharmaceutical firm with a substantial presence in the Philadelphia area, where he was born and raised. His peers know him as a diligent, meticulous lawyer who manages to balance a penchant for detail with a keen ability to cut through the heart of thorny legal issues and render tight, well-crafted opinions.

DelCollo was always an avid reader and orderly thinker. An excellent student through middle and high school, he proudly matriculated at Duquesne University, one of Pittsburgh’s most prestigious private universities, in 1998. 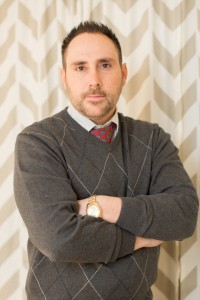 While enrolled at Duquesne, David DelCollo discovered two loves: the law, particularly civil and contract matters, and the city of Pittsburgh, which he loved nearly as much as his hometown.

“I realized that I could actually make a go of it as a lawyer for the first time as a freshman or sophomore at Duquesne,” says DelCollo. “And I just fell in love with the city of Pittsburgh: what a great town.”

Unfortunately, DelCollo wasn’t able to stay in Pittsburgh after graduation. Instead, he headed back east to Widener University School of Law in the Harrisburg area. DelCollo graduated from Widener with a J.D. in 2005 and earned admission to the State Bar of Pennsylvania shortly thereafter.

At a time when many of his classmates were struggling to find work commensurate with their skills, David DelCollo jumped right into the fire. He accepted an associate counsel position with Acsys, an IT firm based near Philadelphia. He was promoted to General Counsel within a year, negotiating and enforcing contracts with more than 20 Fortune 500 companies over the following year.

“My work at Acsys enabled me to put what at that point had been relatively abstract formulations regarding technology contracts and intellectual property disputes into practice,” he adds. “I’m a far better attorney for my time there.”

After Acsys, DelCollo accepted a position with a major healthcare system in North Carolina. Though the company has since reorganized, the opportunity to work for a large firm so early in David DelCollo’s career was simply too attractive to pass up.

The transition was tough. As a lifelong Pennsylvanian accustomed to the state’s fast-paced culture and four-season climate, DelCollo had some trepidation about taking the plunge and moving hundreds of miles south. But he’s ultimately happy to have done so.

“My work in North Carolina gave me insight into the dynamics of a large organization in a heavily regulated industry,” says DelCollo. His work also exposed him to the exciting and ever-evolving healthcare industry, which he’d previously engaged with only in tangential fashion. The rapid changes facing the industry, including the implementation of the Affordable Care Act and subsequent legal challenges to the framework, dramatically expanded DelCollo’s professional horizons — supplementing his excellent academic education with real-world lessons that simply can’t be found in the lecture hall or library.

“I was directly responsible for assuring that the major healthcare providers of North Carolina were compliant with the current State and Federal laws, including HIPAA, JCAHO, and ARRA,” says DelCollo. “I also handled internal compliance and served as liaison between PBH and various state agencies.”

After a few years, David DelCollo returned to the Philadelphia area to accept his current position.

DelCollo isn’t an all work, no play type. He puts in long hours at the office, but also finds plenty of time to engage his twin hobbies: fixing up vintage motorcycles and hitting the town with his trusty Australian Shepherd. 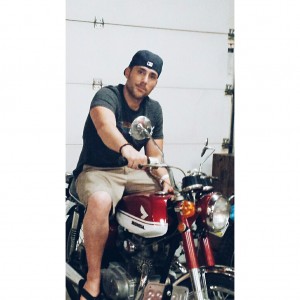 David DelCollo on one of favorites!

Yes, DelCollo is a motorcycle guy. By his own count, he’s fixed up nearly two dozen Harleys (and a smattering of other makes) in his home garage. He specializes in high-end Harleys from the 1960s and 1970s, though “I’ve never met a bike I didn’t like,” he laughs.

DelCollo keeps most of his bikes for weekend rides and shows around the Northeast. He’s also sold a few choice rides to fund further purchases.

“When the weather is warm, I’m out riding, in the shop or at a show every chance I get,” he says.

DelCollo is also well-acquainted — increasingly so over the past few months — with southeastern Pennsylvania’s many fine (and not so fine) dog parks. That’s because he’s the proud parent of a lovable “Aussie Shep,” a rambunctious pooch who’s helping DelCollo readjust to his once and future home’s social scene.