Achieving Dreams From Behind The Handlebars

There are many reasons why a man may possess an undying love for motorcycles. It goes beyond the beautifully styled chrome contrasted with the supple leather accents. It goes beyond the throaty growl of the exhaust and the rumble of your body, harmonized with every revolution of the crank shaft as the pistons stroke the cylinder. It even goes beyond the perpetual presence one experiences when blasting down the highway,-no past, no future,-just now. True, unbridled freedom. 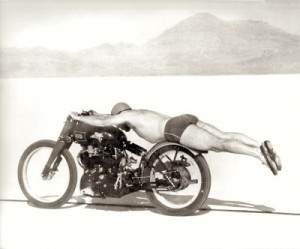 magnetism to ride. There is an unexplainable passion that follows riding a motorcycle, maybe it is even transcendental, but it has time and time again driven a man to overcome amazing odds in the pursuit of his dreams.

In the early 1920’s, a man named Roland Free moved from the long, cold winters of Chicago, to the warm Southern California sunshine, where he could pursue his love for riding motorcycles. Upon moving, he got a job at an Indian Motorcycle shop, selling by day and hitting the California bike scene by night. As motorcycle racing began to become mainstream, it was not very long before Roland began spending his spare time at the race track, honing his skills as racer. Having spent all of his time practicing and preparing, Roland was finally ready to enter his first national motorcycle race, the 100-Mile National Championships on the board track in Kansas City. Roland’s performance was so poor, he did not even qualify to enter the race.

Roland spend the next 25 years striving to be a great motorcycle racer, with some occasional hints of greatness. But on one cool morning at the Bonneville Salt Flats in September of 1938, Roland did something that the world will never forget. Attempting to set a land-speed record, Roland made two passes on his Vincent HRD, having no success. To make matters worse, on the second pass, Roland’s leather protective suit started to tear apart. Determined to succeed, Roland removed his jacket, pants, gloves, boots, and helmet, and laid flat on his motorcycle with not a shard of protective gear, wearing only a Speedo bathing suit and a shower cap.   At 48 years of age and virtually naked, Roland “Rollie” Free launched across that flat at 150.313 miles per hour, not only setting the world land speed record on a motorcycle, but also changing the history of motorcycle racing forever.

While Rollie Free taught us to never give up and to reach for our dreams, another man,

Darius Glover, demonstrates that the unrelenting determination to achieve will not be broken, no matter the odds.

On July 1st 2006, after years of rigorous practice and training, a 15 year-old boy named Darius Glover was getting ready for the race of his life. As he was practicing on the track before the race, he did not realize that before one particular jump, the ground had been recently watered down by the track crew. As he was approaching the jump, he felt himself losing speed, but it was much too late for Darius to slow down or bail from the bike, so he hit the jump without nearly the amount of momentum required to clear the jump. Anticipating the impact, Darius braced himself as best as he could, but when the bike’s frame hit the top of the landing, the bike bounced up and ejected Darius over the handlebars, and onto the ground. After that initial hit, matters only grew worse as the bike then landed directly on his back. After a few moments, Darius tried to get up, but could not, and he soon felt a severe burning sensation in his spine as he realized something was seriously wrong. But what Darius didn’t realize was that his life would be changed forever.

Darius was unable to use his legs, paralyzed from the waist down. Bound to a hospital bed, a doctor walked into the room and said to Darius, “I’m sorry Darius, but you are paralyzed from the waist down, and you will never walk again and certainly never be able to ride a motorcycle again.” To the doctor’s surprise, Darius looked at him with a grin and declared, “you’re wrong.”   And how wrong that doctor was.   Darius Glover has become the first paraplegic motocross racer, professionally sponsored, and currently seeking the U.S. National Championship. And while Darius is actually affixed to the motorcycle and is unable to put his legs down when stopping, taking turns, or landing jumps–he has adapted. As Darius explains “the competition has a huge advantage because they can put their legs out, its kind of weight and balance. The way I ride is totally different than any other rider because they are able to pick themselves up if they fall, able to put their leg out, able to stand up on a jump…but I figured out how to do it.” What some may view as the simple task of riding a motorcycle has become a worldwide inspiration to people everywhere that you can never give up. “You’re still living, you’re waking up every day, you should be happy,” explains Darius, exemplifying that the human spirit can truly overcome any obstacle in life.

There are few activities in one’s life that are truly transformative in the way that riding a motorcycle can be. Something about getting on that bike gets inside your soul and changes you forever, allowing you to reach new heights that you never thought possible. I think the famous architect Antoine Predock said it best, “The connection to place, to the land, the wind, the sun, stars, the moon…it sounds romantic, but it’s true – the visceral experience of motion, of moving through time on some amazing machine…I always felt that any motorcycle journey was special.”

David DelCollo grew up in the Philadelphia area. An avid reader, he excelled in the humanities and social sciences through middle and high school. It surprised no one when he announced he’d be enrolling at Duquesne University, one of Pittsburgh’s most prestigious private universities.